Difference between revisions of "Group"

Ships can be grouped in fleets (look at video below). This eases the handling cause you can give orders to the whole fleet at once instead of every Ship. Fleets have always the Empire specific emblem to make it easier to distinguish between them.

Here a Ship-Symbol with explanation.

The possible orders for fleets are illustrated here.

A fleet is a group of Ships. You can create fleets with the order -group- in the Order menu. This opens the fleet grouping screen in which you can add or remove Ships. If you leave this screen all selected Ships are part of the fleet.

Attention should be paid to the point that a fleet works as a unit. That means for example, that the slowest Ship defines the maximum speed of the fleet and some orders are unavailable even if a single Ship could perform them. (and not every Ship have this special order)

To compensate this disadvantage its recommended to group fleets with Ship types which are compatible with each other. (at least for the special purpose you wanna use them) The out assorted Ships can be easily regrouped to another fleet by their Ship type (for example destroyer) and when required added back to the main fleet.

A fleet will be shown in the Galactic Map in the same way like a Ship. Only a click on the Ship symbol shows more details in the Info Section. A fleet has at top left a number which shows how many Ships the fleet contain. The first Ship of the fleet give the name for the whole fleet. A fleet with different ship types is called "mixed fleet" a fleet with only one ship type will be called by the name of this type (for example "Cruiser").

A Double Click on the symbol of a fleet in the Info-Section shows the screen Group Fleet in which all Ships are illustrated.

This way you can look at enemy fleets too.

In a fight a fleet means every Ship (from one Empire ) in a sector that is involved in the battle. For example there is no need for a Flagship to be in a special fleet, as long as it participates in the fight, the "Commandship" bonus works for every Ship in the battle.

general: +5% Damage Bonus for every additional Ship Class after the first one:

Video: group Ships and extract Ship out of a group 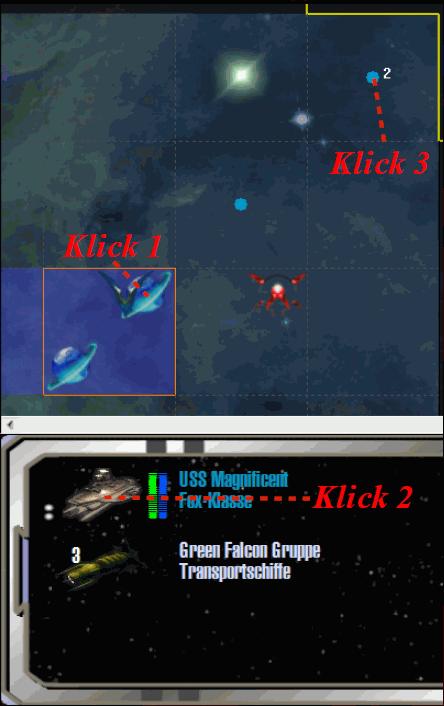